The product has been added to the basket
Menu
SparVinduer UK

You have no items in your shopping basket.

All wood has knots! Wood is a natural material and a knot is the remnant of branches and twigs that emerged from the tree. When producing windows and doors, it’s an advantage if there aren’t any large knots or a large number of knots in the wood, as this will reduce the risk of resin seeping out and causing stains. At the same time, the risk of rot and fungus is reduced. 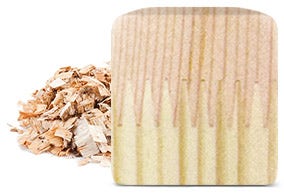 When we at SparWindows produce our doors and windows in timber or aluminium clad timber, we optimize the quality of our pinewood by reducing the percentage of knots as much as possible. The technique that is used to remove these knots is called “finger-jointing”, as the method resembles interlocking fingers.

At SparWindows we produce our timber doors and windows in slow growing Nordic pine. Slow growing trees give the best quality wood for production of windows and doors. The slower the tree grows, the less air there will be in the tree, which strengthens the tree and makes it more durable. Slow-growing pine trees are primarily found in Northern Scandinavia, as the long winters and short summers slow down the growth rate of the trees.

Finger-jointing is an advantage if the wood is to be used to produce windows and doors, as durability is increased and large knots in the wood are eliminated. If windows and doors are produced in pine with large knots, resin will begin to seep out of these knots within a short period of time, leading to unsightly yellow stains and blemishes (often during the summer, when the temperature rises).